How tech is opening new doors for Nairobi

Few would deny Silicon Savannah has a great ring to it. But behind the hype, there are some firm foundations on which Nairobi’s growing reputation as a tech city is being built.

A combination of World Bank funding, government support and the arrival of major global companies such as IBM and Microsoft in recent years has boosted Nairobi’s stature in the tech sector and helped to make it one of the most dynamic cities both in Africa and the wider world, according to JLL’s latest City Momentum Index.

It also has other factors working in its favor; an economy with less dependence on raw materials and natural resources than some of its other African peers, and with a bright, well-qualified pool of IT labour.

“Innovation is a growing part of Nairobi’s economy,” says Matthew McAuley, senior global research analyst at JLL. “In recent years it’s built a thriving culture for start-ups and become a leader in mobile payment, with apps such as the popular Vodafone-backed M-PESA money transfer app. M-PESA’s success has inspired the younger generation of Kenyans and made them think that they could also make a success of tech.”

While tech incubators such as Nailab have been set up to encourage start-ups, companies specializing in the research and development side are also getting a warm welcome, with the government last year boosting its spending on research.

“R&D – particularly in software – has grown and that’s thanks to international arrivals such as Microsoft,” says McAuley. “There’s a good amount of collaboration with local universities, which are contributing to a talent pipeline to fuel its future tech scene.”

The success of many tech start-ups is directly linked to demand for the products and services they deliver. Nairobi’s specialism in app development comes at a time of increasing mobile phone usage among its rapidly growing population. The city is tipped to be one of the world’s fastest growing cities in terms of population in the next five years.

Start-ups offering on-demand parcel courier services, have grown in correlation with population growth and cellphone use, with Kenya having recently overtaken Nigeria in terms of mobile internet traffic. Improvements by Telkom to the country’s 3G and 4G networks are afoot.

While Nairobi’s tech scene is celebrated by the country’s government, it’s also been striving to make sure success spreads beyond the capital and other cities, such as Mombasa, feel the benefit. Passed in 2010, Kenya’s new constitution set out a more regionalized approach to policy-making. Almost a decade later, the emergence of more tech companies is seen as both an opportunity to extend the innovation ecosystem beyond Nairobi, explains JLL consultant Lucy Githinji.

“Improving the country’s digital infrastructure can allow for more remote working – which the government is encouraging – and ease the pressures on the capital,” she says. “Better connection speeds and more reliable services can mean that a trip to Nairobi from the village may not be so essential.”

The tech sector could benefit from Nairobi’s “Missing Link Roads” project, aimed at improving road connections – which could open up new location options for companies and improve journey times for employees.

“There’s certainly a move away from CBD thinking,” says McAuley. “Infrastructure improvements will have a positive impact – both practically and for prospective occupiers.”

With backing from the World Bank, the smart city project Konza Technopolis, for example, is some 60 kilometres south of the Kenyan capital. Due for completion in 2030, the scheme has been supported by government – a sign of how much importance is placed on the sector for future growth.

McAuley says the emergence of initiatives such as the African Leadership University and the Meltwater School of Entrepreneurial Technology, both based at coworking space Nairobi Garage, are further indications that there is much more to come from the Kenyan capital’s start-up scene.

The city is one of the most dynamic both in Africa and globally, according to JLL’s latest City Momentum Index.

“Nairobi’s tech sector is looking to make the next step,” says McAuley. “Can it make the move from African app centre to tech hub, where global firms compete to tap into a pool of local talent and savvy consumers?

“So far, growth has been from the ground up, but tech has the long-term potential to become a much bigger contributor to economic growth, to easing constraints on other parts of the economy – and to real estate demand.” 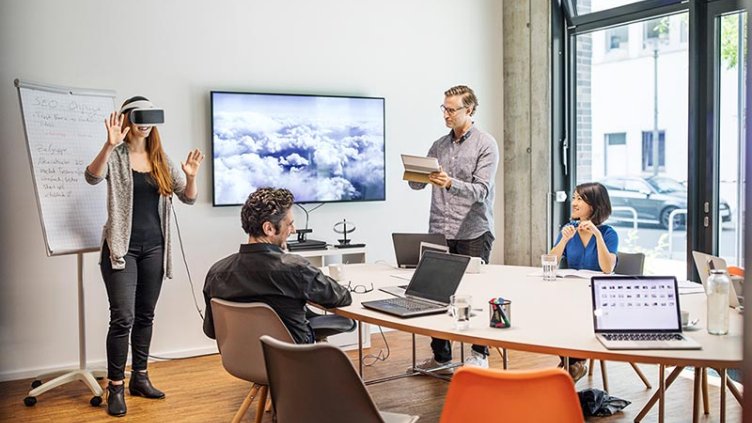 Why holograms are coming to the corporate meeting

How Educational Real Estate is Evolving

Who funds the next wave of warehouse automation?